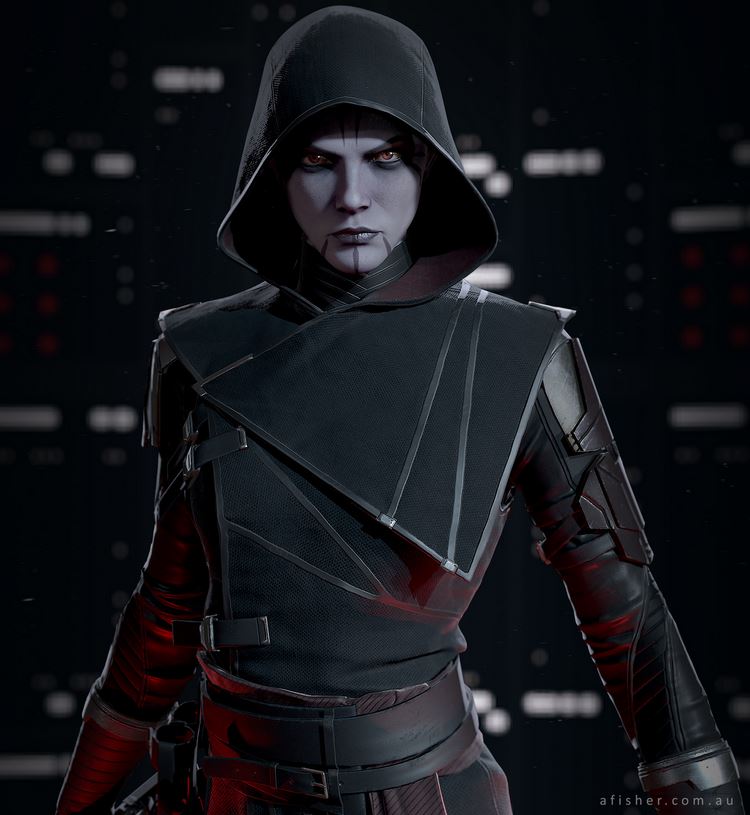 “You’ve told me your existence has been nothing but pain and loss. Never feeling secure. Never having a home. You deserve so much, and I can get it for us. The life we’ll be able to have together” – Quinlan Vos

“What kind of life will that be, Quinlan? The kind where we’re slaves to our hatred? Our rage? That’s what the dark side made me. That’s what it does. Nothing is ever enough. You get more, and more, but you’re never happy. It’s a trap baited with all the things you want most in life—and it’s not worth living. I already left that behind.“― Asajj Ventress “Star Wars: Dark Disciple”

Asajj Ventress was a Bounty Hunter, an Assassin and a Sith Apprentice. Before all of that she was a Jedi. As an infant she was taken from her home planet Dathomir by a Bounty Hunter and enslaved. During a raid by Pirates her owner was killed and using Force powers to defend herself she attracted the attention of a Jedi. The Jedi Ky Narec took Ventress to the temple and she began her apprenticeship as a Jedi. The training helped awaken her force powers which were very powerful.

The Jedi Narec was like a father to her as well as a mentor and she loved him.  Years later during a battle with Pirates the Jedi was killed and Ventress deserted the Jedi Order feeling that it had betrayed her Master. Filled with grief and anger she began to turn towards the dark side.  Eventually she caught the attention of Count Dooku and was trained and indoctrinated in to the Sith. Due to her powers and hatred for the Jedi, Ventress became Count Dooku’s favored apprentice.

Asajj felt at last she was home and she served her Master well. Her powers and skills grew and she became an accomplished Assassin. Many times she came close to killing both Obi-wan Kenobi and Anakin Sywalker under the orders of Count Dooku. The time came when Darth Sidious began to notice Asajj Ventris and the bond that existed between Master and Apprentice. Testing the loyalty of Count Dooku, Darth Sidious ordered Asajj Ventriss be killed. Reluctantly Dooku agreed and he ordered her execution however Asajj managed to escape and returned to her home world of Dathomir where the Witch Order of the Night Sisters reigned.

Deeply enraged by her betrayal, Asajj attempted to extract her revenge by infiltrating Count Dooku’s fortress and attempting to assassinate him. She was aided by the Night Sisters magic and the help of a slave assassin Savage Oppress, a monster created by the Night Sisters spiritual leader. During the battle Savage Oppress turned on them both forcing Asajj to flee in to hiding.

Sought by Dooku, Ventress was eventually traced back to her home planet on Dathomir. A retaliatory strike was launched on the Dathomir Fortress killing all of the Night Sisters in the ensuing battle. Once again Asajj survived and found her self alone.

In the following years Assaj changed. Becoming a Bounty Hunter and Mercenary she found herself forming alliances with the Jedi as they fought a common enemy. Ventress saved Obi-wan Kenobi and helped Ahsako Tano after she was framed for bombing the Jedi Temple. It was Quinlan Vos the maverick Jedi Master who ultimately redeemed Ventress through love. Forming a team in a quest to finally destroy Count Dooku the Jedi and the Mercenary became lovers.

During an attempt on Dooku, Vos was captured by the separatists and brutally tortured and brainwashed, he fell to the Dark Side. Finally it was Asajj who saved Quinlan Vos as she sacrificed her own life to save him. Vos returned from the Dark Side renouncing the Sith. The Jedi honored Assaj Ventris and she was buried on Dathomir.

The tragic story of Assaj Ventress follows a familiar pattern of an orphan who is forced to live a life of codependency and abuse. Things could easily have been different but fate played her a cruel hand. In the end her true hidden spirit shined through and redeemed her. For many, Asajj Ventress is a “villain” in the Star Wars saga. I view her as an enigma and a largely misunderstood character. Asajj serves as a reminder that we should never give up on people, they can come back. I know I did.

Separated from her family and bereft of a heritage and parents all Asajj knew was the hard and cruel life of a slave. Nevertheless she was dependent on her owner and when he was killed in a Pirate raid she lost the only carer she had ever known. Adopted by the Jedi she found happiness and purpose at last and with it her Force powers blossomed. Tragically her Jedi Master was killed and once again she was left an Orphan.

Alone Assaj became bitter and angry. She blamed the Jedi Order for the death of her Master. That anger and hatred was exploited by Count Dooku. In the same way that extremist organizations and gangs attract young and vulnerable people to their ranks, the Sith found a prime candidate in Asajj to do their bidding.

Eventually Ventress was betrayed by the Sith. This is also common in extremist organizations and cults. People are brainwashed and used until they are killed or betrayed. The fall was a shock to Assaj and she returned to her home world of Dathomir, a place she had never known and met her mother, the Night Sister leader Mother Talzin. Among her sisters on Dathomir she at last found a home where she was valued and belonged. This home was soon also taken away.

Drifting in the grey world of the Bounty Hunter and loyal to none Asajj began to realize that the absolutes she had believed in were invalid. She had been full of rage and hatred for years and it had been used by the Sith for their own purposes. Once her use had been exhausted, she was discarded like a broken tool. Ventress realized that she had been dependent on a lie and the loyalty she imagined did not exist. Even her own Mother, Talzin, abandoned her following the massacre of the Night Sisters on Dathomir.

“None of this was my choice, I never asked to be ripped away from my home, from my family. You’ll never know what its like” – Pluma Sodi

At last Asajj began to form her own identity and found her place in the madness that surrounded her. Despite her previous allegiance to the Dark Side she learned compassion for others and the ability to work for mutual benefit. The Jedi had been her sworn enemies, now she no longer saw them as such and was willing to work with them. In Quinlan Vos she found a kindred soul and shared her knowledge of the dark arts of her people. Through shared experience and hardship they became lovers and through that love the darkness that resided within her gave way to light and hope. She was home at last.

The final act of Asajj Ventress is a remarkable chapter in the Star Wars saga and symbolizes the salvation that later redeemed Anakin. In an effort to save Vos from succumbing to the Dark Side, Ventress battled with Count Dooku and willingly sacrificed her life so that her lover should live.

That act alone redeemed Asajj Ventress and bought Vos back from the Dark Side, saving him. Asajj Ventress was a Jedi who had fallen from the path. Desperate to find meaning in her life and to make someone pay for the pain she had suffered through life she had fallen to dark emotions and lived a personal hell. Forgiveness, sacrifice for others and ultimately love redeemed her and bought her back to the light. She did this by herself and it freed her.

Remember, no one holds the key to your own freedom and salvation but you.