Hatred is a powerful emotion. Unlike anger which is a transitory emotion eventually burning out, hatred will endure the test of time and be as potent as the day it rose. I have personally seen and felt the results of ethnic and religious hatred that had lay buried beneath the surface for generations simmering but never extinguished finally exploding into life. Entire communities wiped out, former neighbors and friends turned enemies ready to slaughter each other with impunity.

Hatred flows in the blood. Hate is a living thing; it is passed on like a curse from one generation to the next. Endless wars and bloodshed are fueled by Hatred.

Standing there none of it made sense to me. It seemed insane. I began to question the war and my own motives. Rather than take up arms I decided not to add to the insanity seeking instead to work with Aid groups. I could not find any animosity or hatred in me for an entire people based on their ethnicity.

People do cruel and obscene things to each other out of Hate. Sometimes these acts are done without a hint of anger or pride. Hatred is justification enough for torture, murder, rape, genocide. The very emotion removes all humanity and commonality with the object of ones hatred. To Hate is to separate.

Wrath, the ultimate manifestation of Hatred is considered a deadly sin because of its raw and total destructiveness that eventually and utterly consumes itself to oblivion.

Hatred is a uniquely human emotion. There is no other creature in existence that knows hate. Animals will display anger, aversion, fear and aggression but never deep rooted hate waiting to spring in to acts. Why is that? What is the possible evolutionary advantage of being capable of and having the potential for Hate?

Why do I still feel resentment, righteous indignation and  sometimes even hate towards others?

“You have hate, you have anger, but you don’t use them.” – Count Dooku

In the Army they taught us to “Hate” the enemy, whoever they decided it was at the time. The reason was simple. Killing another human being is much easier if you hate them. You will no longer see the enemy as a fellow human being who shares the same hopes, fears and dreams as you filtered through the lens of hate.

In the course of the training the Hate grows. You learn to hate the instructors and senior ranks because they treat you with cruelty and contempt. In turn you turn that Hate on others. Eventually war gives you an outlet and a target for that hate. Aggression and a willingness to do violence are multiplied through hate.

People are not naturally primed to kill. Killing is not in our nature. The mental and spiritual barriers that prevents a human from killing another is broken down by Hate. A person might kill out of the pure instinctual drive to survive or in a fit of rage where all sense and reason is momentarily lost. Hatred, on the other hand, provides the “sense” and the “reason” for committing the worst of atrocities.

Anakin was driven to the Dark Side through the hatred that grew within him like some insidious tumor. The fire of Mustufar ravaged his body but hatred utterly consumed his soul.

Anakin’s Grandson, Kylo Ren, suffered the same affliction. Ren’s hatred was so deep that he became a psychopath. Hatred had driven Luke to almost kill his nephew Ben Solo. Believing himself entitled to Justice Kylo Ren derived sadistic pleasure and satisfaction in hunting and murdering those who had been close to him, who had hurt him. Hatred spurned him on but as it grew deeper it consumed him.

Anakin driven to insanity and complete loss of identity with his transformation to Vader suffered deeply. Vader was tortured physically, mentally and spiritually with every breath. The Hatred was complete and transmutated itself into raw power. The Dark Side. Vader no longer hated anyone or anything other than himself and his Master. In Vader lay no festering ordinary hatred. There was only a will to control all that is within a closed fist of absolute power. All of Vader’s intent was directed there. 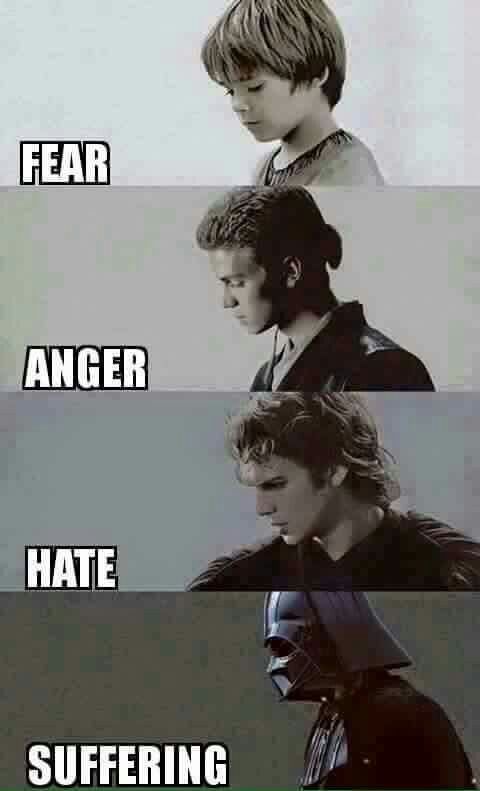 Alcoholism leads to Hatred. An alcoholic not only feels regret, remorse and disgust at their behavior but also deep seated Hate. The Hate can be all consuming. Our disease, other people and especially the self are all objects of our Hate. Refusing to take blame for our condition we lay it on others and our resentment turns to Hate. I wanted to hurt others when my hate grew so big but most of all I wanted to hurt myself. There is absolutely no logic or reason to it, but to the alcoholic is makes perfect sense.

In short it’s a form of insanity.

A man can feel both love and hate in his heart and still function. Alcohol distorts everything. The sufferer will love and hate more passionately but in a way that seems unreal. The disease afflicts our view of the world and twists emotions in such a way that we no longer resemble the person we once were. Nothing is normal and everything is to excess.

Recently a friend told me about the “memory of water”. The controversial theory is that water retains a memory of what resided within it. Water will also store the vibrational energy of emotions directed towards it. The idea sounds fanciful and experiments which have attempted to demonstrate the theory have been unable to be replicated using scientific method.

As a believer in the Force I have to agree that every action, word, thought and emotion carries potential energy. Hate and Love each carry energy. One is dark and the other is light. Love fosters and upholds life while Hate brings war and destruction. Both emotions have consequences.

I attempted to replicate the experiment at home to test the memory of water. Every morning for the first week I woke up and filled my mind with negative thoughts. Suitably wrapped in a foul mood I approached a glass of water on my desk and said the following words; “I hate you! Die! Kill! War!”. I poured all of my malice and anger in to the glass and walked away. Strangely enough the rest of the day did not go well for me. I repeated this every day for a week. By the end of it I was tired and edgy.

I allowed two weeks to pass and poured a new glass of water. This time I paused on awakening to fill my mind with positive thoughts. I approached the glass of water brimming with optimism and said to it “Love, Peace, Calm”. This I repeated every day for a week and sure enough my week went better than during the previous experiment.

What was the final outcome of the experiment? The first glass of water seemed discolored and tasted tepid and stale at the end of the week. It was unpleasant to drink and I felt slightly nauseous afterwards. The second glass of water exposed to loving emotions was fresh and tasted good. I felt no ill effects. As compelling as it seemed it was also inconclusive.

Obviously my experiment was not undertaken using scientific rigor. Any number of variables could have affected the outcome. The fact remain however that if we go through life carrying negative emotions such as Hate it does affects our mental and physical health. In turn Hate cascades in to every aspect of our lives, affecting our relationships and our potential. Hate literally poisons life.

“Hate begets hate; violence begets violence; toughness begets a greater toughness. We must meet the forces of hate with the power of love.” – Martin Luther King

As children we learn to Love before we learn to Hate. Within our true self resides unbounded Love. That is why when we carry Hate we know that it is not who we are. It feels unnatural and heavy like a sickness within us. The feeling of “righteous indignation” and anger it gives us is shallow and leaves us feeling hollow and in conflict with who we truly are.

When we open our eyes to the illusion of Hate, it becomes exposed for what it is. Hate is a wall that separates us completely from our inner divine more than any emotion. Hate separates us from our true nature and from other people. Like a cancer it grows and ultimately it destroys us from the inside out. If you strike with hatred in your heart it will stay with you forever like a dark stain.

Love conquers Hate. It was an act of Love that redeemed and saved Anakin from his living hell. Love stayed Luke’s hand from inflicting a fatal blow on Ben Solo. Luke invited Kylo Ren to strike him down but warned him to do so with Hate would afflict him forever. Perhaps Love will be the final act which will save Kylo Ren and bring order to the Force.

“Hatred does not cease by hatred, but only by love; this is the eternal rule” – Buddha

I’m done with Hate and you should be too. Hate begets hate. Love begets love. Meditate on that.