Oikeiôsis is the Ancient Greek word meaning belonging. The concept of the human need to feel belonging was first theorized by the Stoic Zeno of Citium. To the Stoics Community was everything. Buddhism uses the term Sangha which roughly translates as the “group” or “community” of practicing Buddhists.

Community is also important to us. As social beings we all need to belong to a community where we can contribute and be valued. No one really lives in isolation by choice. To be part of the group is in our make up as a species. We need each other to survive and to flourish and from that need civilization emerged, grew and persists.

The importance of community in the recovery movement is expressed through the pillars of fellowship, unity and service. People come together to share and to learn from one another. By helping others we help ourselves in the process. We understand that sitting alone at home may work for some people some of the time but true progress is made when we join with others in a common purpose. Through others we come to learn that we are not unique but share common problems, hopes and fears. We begin to realize that it is our similarities that bind us together and our diversity of thought and opinion that makes the community resilient. From that we find the strength to recover.

To be Jedi is also to be part of a community. Jedi are active participants in society. They are neither cloistered Monks nor Hermits seeking perpetual solitude. At times we all seek solitude and time away from others to recharge. Once ready we are ready to take our place among others and participate, share, learn, work and contribute in our own way. This is in our nature as human beings.

Sometimes it is easy to get pessimistic about the world around us. Society can seem hostile or indifferent. People often feel disconnected and alone in the world. A person may have thousands of Face Book friends but no one they can lean on and trust. We can create an online persona and profile which attracts thousands if not millions of followers and admirers and still feel lonely. Some of us feel alienated in the real world and eventually in the online realm as the hostility and toxin that pervades it forces us to disconnect even further.

Many of us live in sterile suburban neighborhoods where we live behind locked doors and barely recognize the neighbors let alone know their names.  We commute in cars to work in a sea of traffic feeling disconnected from, if not frustrated with, the blank faces in the cars around us. We sit or stand on trains or in waiting rooms our eyes fixed on our phones, not speaking, not making eye contact.

In the Netflix Documentary “Happy” (2011) we see people living in supportive communities in Calcutta and Copenhagen. Despite the enormous gap in wealth between the two cities there is an undeniable “sameness”. Both communities are close knight, supportive and non-competitive. The members of different families and generations live together communally, share responsibilities and look after each others kids. There is a strong sense of belonging and unity which is increasingly rare today in general.

These people are among the happiest alive. The normal indicators of happiness and wellbeing; gross domestic product, employment rate and housing indices do not apply to these people. The strong sense of community is what makes these people feel happy and fulfilled.

I would be the first person to admit that I am not and never was the most sociable person. Being a strong introvert means I can be quite happy standing alone at a party without engaging anyone. Acutely aware that I was a quiet and reserved type when I was younger I naturally wanted to be liked by others. Alcohol was the remedy which allowed me to be gregarious, outgoing, funny and friendly. Drunk, I became approachable and my awkwardness was replaced with a confidence and a cocksure attitude that won people over and made me friends. Over the years I kept going back to booze and never really learned how to just be myself and connect with people on a deeper level. By the time I hit forty I realized I had all the social skills of a man in his early twenties, if not his teens.

Being alcoholic is to live in a delusion. To find recovery is to see the falseness for what it is. The illusion of social acceptance and community which alcohol creates becomes apparent. We think that we “fit in” but we realize that we don’t. People who we thought were friends turn out to be nothing of the sort. Our own motivations with people become clearer and we realize they were selfish and self centred. We used people and prized things.

Getting sober we realize the relationships we had with people outside of our sphere of drinking, professional and personal, was often dishonest and sometimes abusive. Along the way we have hurt and damaged those we care about. If we are honest with ourselves we realized that we lived on the fringes of community, never in it. We did not really belong. All of this had to change if we were to truly recover and take our place in society.

Being in recovery and becoming sober has forced me to re-evaluate my place in society. I have come to realize how easily I could have ended up in jail, dead or in an asylum had I continued. In recovery we learn to re-enter the community and find our place and purpose. The attitude of entitlement and “special treatment” that we used to demand in abuse is gone. We realize that in life we must earn our place and make our way without expecting dispensation because we are somehow “special”.

The community is about the whole not the individual. By being part of that whole and contributing in some small way we start to feel belonging in a real sense.

Most of us are not in a position to move in to a commune or co-housing arrangement where strong community is fostered as in “Happy”. There are still a number of ways we can improve our connection with others and feel part of our broader community:

Stoic philosophy challenges people to consider themselves not only members of their community and country but citizens of the world and cosmos. The “View from Above” exercise is used to remind us that we are part of a whole which extends far beyond ourselves and our immediate circle. The Circle of Hierocles was drawn more than 2500 years ago to depict cosmopolitanism. The ancient Stoics word for “belonging” to community was oikeiôsis. The ancients saw themselves as belonging not only to themselves but in expanding concentric circles, their family, city state, country, the world and cosmos. 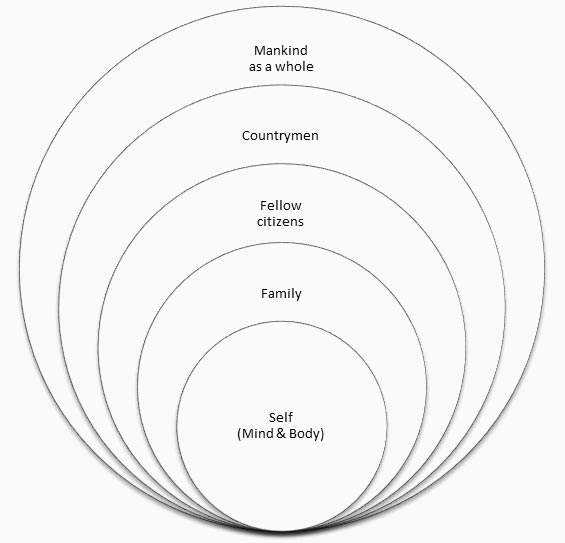 The Circle of Hierocles  (Source: https://howtobeastoic.wordpress.com )

We should take the time to broaden our perspective as human beings. Every action and choice that we make has a broader consequence and reach than we imagine. By understanding our place in society and our role in the community we can live more mindfully and in accordance with our nature.  We become connected with the whole.

A View from Above Meditation by Donald Robertson