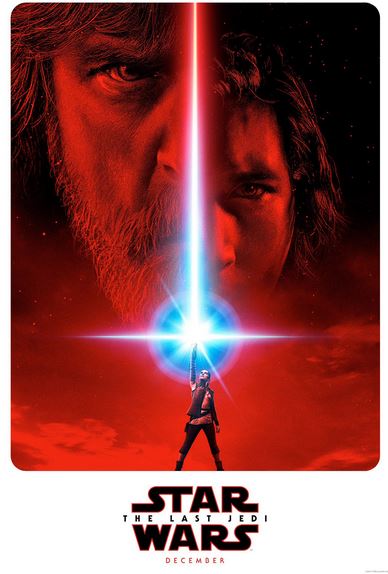 Tomorrow at this time I will be a settling in to watch “The Last Jedi”. I’ll be honest I haven’t been to see a Star Wars movie at the cinemas since 1983 with the release of “Return of the Jedi”. The prequels and the last two offerings from Lucas / Disney I have watched at home months after they were released.

I’ve never white knuckled the count down to release date or stood in a queue with the Sci-Fi geeks wearing a Jedi robe at a midnight screening. Given that I’ve never bothered to watch a Star Wars movie on its release date, the question “why this one, what’s so different?” is a valid one. There are two reasons.

Firstly I have a movie voucher which needs to be cashed in.

Secondly, I’m intrigued by the choice of title. There has been a lot of discussion about the actual meaning of “The Last Jedi”. Is it reference to Luke Skywalker? Or is Rey the Last Jedi? Is there finality in the statement that we will see the final end of the Jedi in this episode and the emergence of something else that is more palatable to mainstream opinions?

I know next to nothing about the actual plot of the movie. I never got invited to the Premier or exclusive early screenings. I don’t even known anyone who knows someone who did.  Disney has also closely guarded details about the actual story.

I can’t offer spoilers, only guesses and a bit of philosophy. If you are reading this after having seen the movie you may say “Ha! You got it completely wrong!” If so, that’s fine. I have some questions for you.

During a recent interview Mark Hamill was very cryptic about the movie plot. Many pundits online wondered whether there was a hint of disillusionment or antipathy about the movie coming from Hamill.

It is no secret that the current trilogy brings an end to the original Star Wars line up. Han Solo is dead and Harrison Ford is out of the picture. Carrie Fisher as General Leia will make her last appearance in this movie on the eve of the first anniversary of her untimely passing. Does this episode also see the demise of Luke Skywalker?

Is that the whole story though? Is something else afoot? What is Disney’s intent with the Jedi Order? Is there a deeper reason to Hamill’s apparent non nonchalance and rumored misgivings about the plot than a possible final retirement from the franchise to make way for newer and fresher blood? Are the fans of the original trilogy going to be walking out disappointed or will we be begging for more?

Since 1977 I’ve been asking questions about the plot and direction of Star Wars. The franchise has become very successful at keeping us guessing.

I read this statement in a LA Times review:

“The Last Jedi is so beautifully human, populist, funny, and surprising. I cried when one POC heroine got her moment because films like these leave their mark on entire generations – and representation matters.”

Two words jump out at me; “populist” and “representation”. Both words suggest a carefully calculated social agenda built in to the plot. Hollywood is an epicenter for the assimilation of popular thought in to mass consumption through movies.

If we go back in time we can see how the views and attitudes of the day are reflected in the story lines and movies characters of the day. Movies have always been an effective way to communicate change to generations and to hold a mirror to the face of society. Star Wars is certainly no exception.

Stars Wars is a mythology that was born at a different time. When Episode 4 “A New Hope” was released in 1977 America had recently been defeated in a long and bloody war in Vietnam. The counter culture was winding down in America. Hippies that had not found responsibilities, careers and suits were getting high and spiritual in places like the Hindu Kush and Himalayas. The Jesus revival was in full swing in America.

The nation at the time was finding itself and trying to determine its identity after the turbulent post-war period. George Lucas was a product of these times and had cultivated a personal philosophy which resonated within the movie through the mystical and enigmatic Jedi. As a 10 year old I identified immediately with what the Jedi had to offer.

Things have changed in the last forty years. The buzzwords of the current times are “political correctness and representation matters” among other hashtags.

There is nothing wrong with ensuring that gender and race are given fair hearing in Hollywood Blockbusters. No producer in Hollywood wants to release a movie that may come across as misogynist, racist, patriarchal or homophobic.

The fallout however is that the Star Wars Universe may be reinvented to conform with ideology rather than remaining true to the fictional premise of the story.  Jedi may no longer be welcome in the modern era. The Jedi Order after all was a pseudo monastic religious order that was by nature patriarchal and full of “old male” stereotypes at the helm. Not exactly diverse or representative.

There were female Jedi and Jedi Masters but no females existed in the Jedi Council at the fall of the Republic in Episode 6 “Revenge of the Sith”. With the exception of Princess Leia and to some extent Padme Amidala all of the hero archetypes in the Star Wars original and prequel line up were male. The only person of color who could be called a hero was the scheming smooth-talking smuggler, Lando Calrissian. Jedi Master Mace Windu had a minor role in the prequels but he was more “Realpolitik” than progressive.

In a recent article on “Screen Rant” a compelling case was made maligning the Jedi Order for a series of bad decision throughout its history. The Jedi Order were not perfect in fiction but they were nothing like the Sith. The faults that ran through the Jedi Order ultimately led to the rise of the Empire and its ultimate betrayal and destruction. The whole cannot be blamed for the errors of the few.

Is a type of revisionism in Star Wars really appropriate? Do we now need to ensure that the story fits snugly in to a politically correct agenda in order to avoid offending someone at the Oscars? Should the fictional Jedi be relegated to the dust bin of history? Are we ready for a feminist Star Wars with a secular, sexy-strong and independent light sabre wielding Grey Jedi out to rid the galaxy of the oppressive patriarchy in all its forms? Does Star Wars need its own Wonder Woman? I guess the Box Office sales and reviews will answer that question in good time.

Whatever happens in this movie, after tomorrow I’ll keep being Jedi regardless. None of it really matters in the end. No matter what happens in my life I’ll likewise keep being sober. What happens outside of my control is outside of my control. The real reason I want to rush out and see this movie boils down to one question; is this really the final end of the Jedi on the big screen? Will Luke really “die”? If so, I want to see Luke Skywalker  transcend to the Force like Yoda in “Empire”.

May you enjoy the movie.