Lightsaber dueling is the Jedi’s sport of choice.

Jedi duel with lightsaber replicas to practice living in the present moment. It’s hard to think about the past or the future if you are dueling with a lightsaber! Lightsaber practice actually has a multitude of benefits. Dueling helps improve a Jedi’s coordination, flexibility, and balance because when dueling with a lightsaber, it becomes an extension of you. It’s a good form of cardiovascular exercise too. The real lightsaber only exists in the Star Wars Universe, but for the Jedi the lightsaber is a powerful symbol that represents alertness, mindfulness, agility, discipline, skill and living in the present moment.

Mention Jedi and the first thing that comes to mind is the beautiful and elegant Lightsaber. The primary weapon of defense of the Jedi was a symbol of the order for thousands of years. The Lightsaber was also lethal and bought the Jedi close to their opponent.

Unlike a blaster or a support weapon a Jedi had two choices with the Lightsaber. They could deflect lasers back to their origin striking the opponent alternately they used it as a sword. The Jedi would close in and bring the Lightsaber to the enemy.

“(The Lightsaber) is the weapon of a Jedi knight. Not as clumsy or random as a blaster. An elegant weapon for a more civilized age. For over a thousand generations, the Jedi knights were the guardians of peace and justice in the old Republic. Before the dark times. Before the Empire. – Obi-wan Kenobi “A New Hope”.

There is no such thing as a Lightsaber in our Universe, at least not yet. Even if it were created it is unlikely to be used as a close quarter weapon for the simple reason that anything that gets close to a Lightsaber gets burned. It would be too dangerous to wield. Real world Jedi use replicas and schools have sprung up in Europe and the United States that teach the art of Lightsaber dueling.

I don’t train with a Lightsaber replica, in fact I don’t even own one.  Fortuitously my martial arts uses a weapon of defense which is as elegant but far less conspicuous than the Lightsaber; the humble cane.

Cane Fighting is an integral part of the French martial art called Savate. The cane was historically used as a training device to teach Officers in saber fighting. With the banning of carrying swords and long knives by the French Emperor the public adopted the cane as a suitable alternative. The cane became an accessory to the French gentleman. Across the channel the British caught on. Canes with hidden blades were sold, some could fire a small caliber round as a last resort.

Today we seldom see people in the street with canes unless they are infirm or elderly. The cane is still taught as a form of defense along with other stick forms however it has limited use as an able bodied person carrying a cane would likely attract as much attention as a person wearing a robe and replica lightsaber.

My first cane lesson went like this. I was taught the “salute”, “en garde” and the basic strikes, blocks and feints. Then there were the basic foot movements, advancing, moving side ways, retreating. In cane fighting one is always moving, never stationary. It is similar to fencing but far more dynamic.

The French have a codified version in which points are awarded for “touches” and which illegal moves are penalized. The street version (Canne de Defense) however mixes cane strikes with lethal booted kicks and sweeps, grappling, holds and punches. When the opponent is down the handle can be used to pommel the opponent until he is senseless. The hook of a walking cane can be used to lock, hold and sweep an opponent.

The sport known as “Canne de Combat” is probably the closest thing I have encountered to Lightsaber dueling. It is fast, fluid and requires aerobic fitness, agility, stamina and presence of mind.

The cane has served to remind that one should always lead with their sword hand and sometimes it is smarter to “riposte” than “lunge”. It is also handy to know when to withdraw. These lessons are useful in other areas of life as well.

“The words of the reckless pierce like swords, but the tongue of the wise brings healing.”

Our words are also like Lightsabers. They can do harm or bring light and healing. We can us our words to rally people together or we can use them to create rifts and division. Words are powerful. We must know when we use our words that they may cut as deep as a Lightsaber. They may wound others but also ourselves.

The art of communication is mastered over time and with many mistakes. It seems simple enough though. One person speaks, the other person listens and responds.

An ideal exchange involves active listening with feedback and validation. Listen without judgement and keep silent resisting the urge to cross talk. Speak clearly using unambiguous language and are conscious of nonverbal cues such as body language. Seek understanding and we provide the listener with the chance to make their case. Accusations without evidence and value judgements are avoided. Focus on the issue at fault not the person.

“Words are like swords, if you use them the wrong way, it’ll turn into ugly weapons.”  – Gosho Aoyama

When we communicate be mindful of Verbal Fencing. In the past I could not stand to be corrected and contradicted. A divergent opinion to my own would spark disagreement, argument and resentment. In recovery I have learned to swallow my pride and avoid tit for tat exchanges. An argument should remain objective and not intended to hurt. There are no points for “touché”, “riposte” and “counter attack” in an argument. No one wins in a bout of verbal fencing.

Always remember that the tongue is the only part of the body which gets sharper with use.

We may not carry a Lightsaber on our belt but we can carry one in our heart. For me the symbol of recovery is three lightsaber joined in to a triangle and surrounded by a circle. The Lightsabers represent Humility, Respect and Temperance, the circle represents Faith. These are my cardinal principles which I measure myself against. They are my swords with which I use to recover and improve every day. 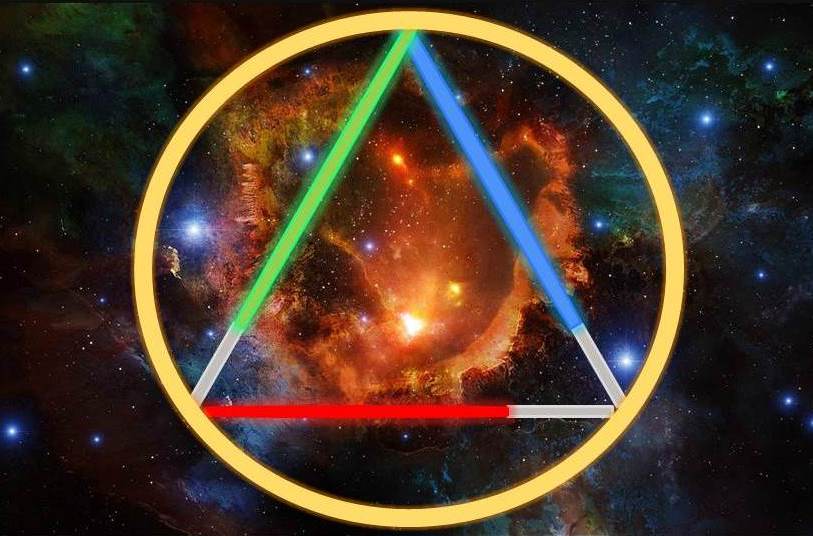 What is your Lightsaber? How do you use it?

“For the word of God is alive and exerts power and is sharper than any two-edged sword and pierces even to the dividing of soul and spirit, and of joints from the marrow, and is able to discern thoughts and intentions of the heart.” – Hebrews 4:12