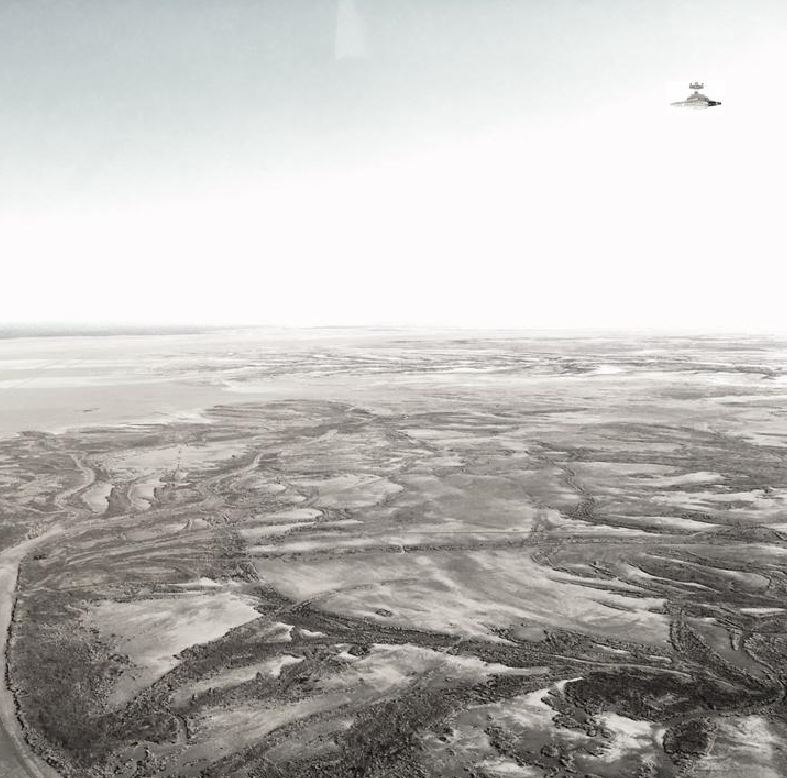 The first thing most people imagine when they hear the word Jedi is Luke Skywalker or Obi-wan Kenobi with Light Saber in hand rushing towards an enemy as they deflect laser bolts. The image of the warrior is prominent in peoples mind. It is true that the fictional Jedi are armed with light Saber the same way Monks of the east and west were armed with staffs and martial arts to defend themselves. To imagine the Light Saber as a weapon of offense is an error in fact it was a symbol of the Jedi principle of protection and defense. The intent of the Light Saber is its power. It was only used as a weapon as a last resort and never in anger.

In “Return of the Jedi” Luke casts aside his Light Saber during the final confrontation with Darth Vader. The act is symbolic. Luke decided to cast his anger aside and find the love and compassion within him. It is the only way he can defeat Darth Sidious and redeem Vader.

In “The Last Jedi” the ageing Luke Skywalker takes the Light Saber offered to him by Rey after she has found him living as a Hermit on the hidden planet of Ahch-To. With comical irreverence Luke throws his old Light Saber behind his back.

For years Obi-wan Kenobi resided on Tatooine watching over Luke from a distance. Although he still had his Light Saber it was kept aside. Even in confronting the Sand People who had captured Luke Skywalker in “A New Hope”, Obi-wan Kenobi chose only to use the power of perception and his own voice in driving the Tuscan Raiders away in fear. The Light Saber is symbolic of the Jedi only if it used with Right Intent.

I’ve often heard the statement that firearms kill people. A gun can be used to kill a person however it is not the weapon itself that decides its end use. The intent to kill resides with the wielder. A sword can just as easily be beaten in to a plow than used as a weapon depending on the intention of the user.

Intention is therefore everything in the “why and how” we conduct our life. I can choose to own a Light Saber, a Gun or a Pit Bull Terrier.  The Light Saber replica won’t have much use but how I choose to manifest my intent with a gun and an “aggressive” breed of dog is entirely up to me. I can keep the gun locked away and hopefully never ever have to use it and I can train the Dog to be a loving pet; gentle with people and other animals. There is still an element of uncertainty based on what I have control over and what I don’t. The Dog may unexpectedly bite a child and the gun might be stolen and used in a crime.

With every decision we make there is always an intent, a purpose. Why do we make the choices that we do? What is our intent? When I left High School and presented to an Army recruiter the first thing he asked me was “Why do you want to join the Army”? He said my response was important and it had to be honest. The answer revealed my true intention and whether I was going to stick my contract or wash out.

Likewise when I first approached the Jedi community and revealed I wanted to train in Jedi philosophy I was asked to spend some time thinking about “Why Jedi”. What was the intent of my choice? Would it sustain my practice past a few weeks or months? Did I realize it was an internal path and one I would have to keep largely to myself? I found that being able to reason rather than rationalize my intent before doing something was more likely to align it to who I am and want to be.

One of the most important questions I had to ask myself when I was drinking to excess was “Why am I doing this? What is the purpose?” There was no reasoned or even rationalized response. In the beginning the intent of my drinking had been to feel better within my self, to fill some emptiness inside. I wanted to be accepted and loved like everyone else and drinking seemed to promise a way into fellowship, confidence and acceptance.

Drinking could make me feel part of something bigger than myself and to be somebody who could be respected, admired and sought out. Of course this was all a mirage and I fell in to the trap and it took me to a dark place after all the illusions I had created began to fall away.  Something entirely different was revealed. An image that was unbearable to confront.

In the end, the intent of drinking was to satiate a need that could not be satisfied and to keep the beast within fed. It had become a cage. Realizing true intent was like lifting the veil that had shrouded the truth for years. I began to understand the true nature of my disease.

All the times I had tried to quit or at least control my drinking in the past had eventually ended in relapse. In going on the “wagon” I had had good intentions but I could not follow it up with meaningful actions. My intent was also conditional on certain loop holes in thinking. Like small cracks in a dyke they eventually split open and allowed the entire structure to collapse in a flood of booze. Intention was moderated by rationalization. I figured I could still achieve my goal of sobriety with the odd loosening of the belt. This of course was a form of “False Intent”.

Where do your priorities lay? What is important to you? What matters most of all? In the beginning my intent was to simply get through the day without taking a drink. The next day could look after itself and the next day after that. My commitment was for 24 hours.

I would renew my intent every morning and claim the strength from my Higher Power to achieve that. At the end of the day I would review how things had gone and on turning off the light thank my Higher Power for another sober day. My goal was sustained and long-term sobriety and my dream was to realize serenity.

My intent was simply to claim a daily reprieve and stay sober one day at a time through application of certain virtues and principles. This was a form of “Right Intent”.

“What we really have is a daily reprieve contingent on the maintenance of our spiritual condition” – Alcoholics Anonymous p85.

The second step and virtue on the Eight fold path of Buddhism is “Right Intent”. Intention is more than resolve. Through resolve we decide to do something but it is not enough on its own. We must have “Right Intent” in order to stay the course. For example would anyone who resolves to marry another person bother if they did not intend to give the marriage their utmost for as long as possible?

Resolve and Intent are two different things and of course they work in tandem. Both must stay as strong as the day we set off for the duration of the journey. Yes there are days when we stagger and fall but intent keeps us moving forward even when resolve falters. We strive for outcomes but must also accept what is in our control as well as what is outside of it.

Intention is flawed if our intent is;

Right intent is expressed through thought, word and actions. Therefore being mindful of intention is important. We should consider the impact of our thoughts, words and actions on self and others.  The potential consequences either immediate or delayed should be considered. We may do something with the best of intentions but not realize the consequences of our actions until much later. By contemplating our actions and looking beyond outward far beyond ourselves we become more mindful of the reach of our intent.

Always ask what your intent is and whether it serves or not.

The Jedi Method is a formula used to apply mindfulness in our actions. Our desire is for an outcome which aligns with our values. The method states:

If our Intent is right and our actions follow suit than there is a high likelihood, while never guaranteed, that outcome will agree with action and intent. Action and Intent is applied in a world in which we do not exercise supreme control over all external factors. We cannot foresee the future or account for every single possible variable. We only have what we control (Intent and Action).

We live in an imperfect system and everyone makes mistakes. All that one can reasonably expect is that we take due diligence in our actions. We are accountable and responsible for the choices we make. If our intent is challenged we can defend our actions with conviction and without hesitation.

We take charge of the things that we can control, work with what we can influence  and we willingly surrender the things over which we have no control.

A Light Saber can be a weapon or a door stop depending on the intent of the user. Perhaps Luke Skywalker had learned towards the end of his physical existence that the mind is far more powerful than a weapon. The Last Jedi decided he no longer needed his Light Saber even for the purpose of protection.

On the Planet of Crait Skywalker faced his old apprentice and nephew, Kylo Ren, who was bent on killing him. Luke showed that one can still achieve an outcome without reaching for a Light Saber or without even being there. Victory can be won with the mind.

Across the Galaxy on the Island Jedi Refuge of Ahch-To, Luke Skywalker awoke from his Force projection and surrendered himself to the Force. As he met his destiny the twin suns set over the ocean.

Intent is the key.