The Elephant in the Room

One of the things that hold people back from making meaningful and lasting change is cognitive dissonance. Its like ignoring the Elephant in the Room. Take a smoker for example or an alcoholic. Both are aware that their habits are harmful. The smoker is cognitive of the fact that smoking causes lung cancer and the alcoholic is aware that drinking is doing her harm; however both will persist in the habit. We won’t talk about it. Why?

The theory of cognitive dissonance states that individuals do not like their actions to conflict with their attitudes. The divergence results in tension called cognitive dissonance. People will find ways to reduce the dissonance by adjusting their behavior, seeking information that contradicts their beliefs or deciding that on the balance of things the habit is worth it. Life is too short so why give up the pleasure of smoking, drinking or drugs.

From the time I started drinking I knew that it was doing me harm. I had seen the effects and I knew that based on a family history of alcoholism I was at high risk of becoming alcoholic. I experienced a high degree of cognitive dissonance expressed as regret and remorse at my drinking.

Over the years I tried to control my drinking and stop many times without luck. I was trying to cure the cognitive dissonance just not the drinking. If I could drink without all the bad stuff then it would be OK.

Often it’s a close call that gets us to re-evaluate. Fear of death seems to spike dissonance. After almost getting run over by a Semi Trailer I decided to quit drinking. The actual driver approached me in a bar and said that he would have run me over had he not recognized me. Pulling to the side had almost caused him to leave the road. His suggestion was that I quit drinking or probably die. Three things happened:

Almost being flattened by a Semi Trailer had me readjust my attitudes in a manner that reduced my cognitive dissonance but allowed me to continue to drink unabated.

Being alcoholic creates a new type of cognitive dissonance, the tension that exists when we refrain from drinking and our body and mind is addicted to it. The thought of refraining from alcohol is bad enough let alone imagining a life time without it. In addition we can easily justify what we do to ourselves and others. We become trapped in a paradigm that can shift to ignorance and conflict with others. The opinions of others no longer matters. We become resentful of those that disagree with us or worse, try to change us. Addiction at its worst will see people do anything to protect it.

“Alcohol may be man’s worst enemy, but the bible says love your enemy.” – Frank Sinatra

Star Wars has many examples of inner and outer conflict. Luke Skywalker was a case study in cognitive dissonance as was his father Anakin. They both suffered from a lack of rationality bought on by conflicting ideals and motives. Anakin wanted to be a Jedi but at the same time he wanted to control people, places and things. Anakin wanted to bring order to the Force in his own fashion and overcome mortality. The tension eventually pushed him to the Dark Side. Luke on the other hand was conflicted as to his role. Is he a moisture farmer or a rebel, does he fight his father or side with him? The story of Luke is a classic “Heroes Journey”.

We see the same type of dissonance in the “The Force Awakens”, Storm Trooper Finn has a crisis of conscience. Being a merciless killer for the Empire does not gel with him and he deserts his post to join the Rebellion. Soldiers who decide to desert on grounds of morality don’t usually do it at the spur of the moment as Finn suggests. There is usually months if not years of dissonance. What they do does not agree with who they are. Something eventually has to give and they leave.

“I’m not Resistance, I’m not a hero, I’m a stormtrooper. Like all of them, I was taken from a family I’ll never know. And raised to do one thing. But my first battle, I made a choice. I wasn’t gonna kill for them. So I ran.” – Storm Trooper Finn “Episode VII: The Force Awakens” 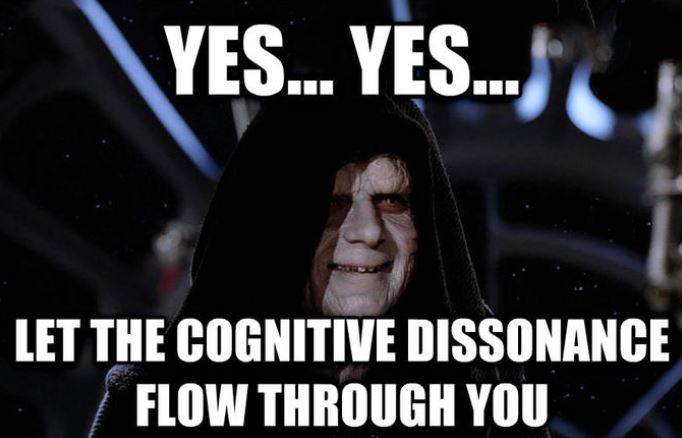 I know a few deserters and there is one thing in common with all of them. All quit because they were deeply dissatisfied and disillusioned. Some were close to suicide. They could not stay no matter how hard they tried. They were still torn at leaving their comrades behind. All of them to this day regret their decision. Cognitive dissonance can suck. No matter what we decide to do, it is going to hurt and there will be regrets even if it was the right thing to do.

So how does one deal with Cognitive Dissonance? No one likes to feel lousy about what they are doing especially when they know that it is the right thing to do. A person can be sober and still have Cognitive Dissonance. Despite being dry they may have adopted habits or attitudes that are maladaptive or destructive. The “Dry Drunk” can eventually relapse.

Emotional sobriety is about accepting ourselves and embracing who we are. It is about rejecting denial and being willing to see things differently. Often this means rejecting our previously deeply held prejudices and attitudes. Recovery means being willing to explore new ideas and adapt to life readily instead of being attached to one way or another.  When we know who we are, commit to values and act in accordance with them in a spirit of non-attachment we are unlikely to suffer dissonance.

Be gentle with yourself, Let Go of what does not serve, especially limiting prejudices and adopt an attitude of “Live and Let Live”.