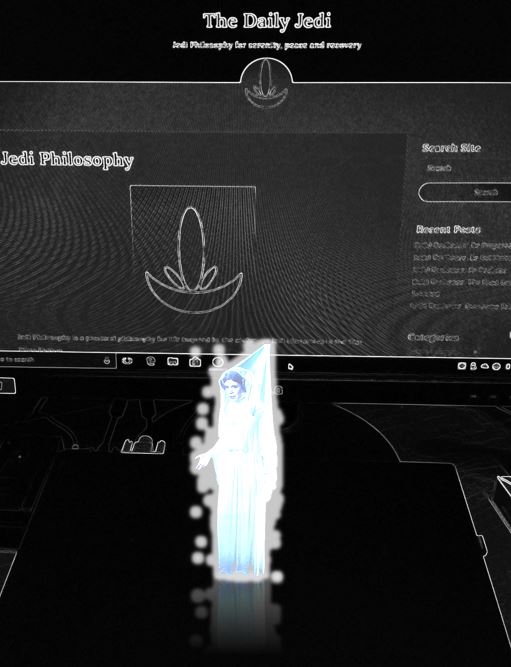 “Help me, Obi-Wan Kenobi. You’re my only hope.” – Princess Leia

In the opening act of Star Wars we see the Corvette “Tantive IV” under attack by an Imperial Star Destroyer. On board the Tantive IV is Senator Leia on a diplomatic mission from the Imperial Senate to her home planet Alderaan. Moments before the Tantive IV is seized by Imperial Storm Troopers Leia hides a desperate call for help inside the Droid R2D2. The message, along with information crucial to the survival of the rebellion, would find itself to Luke Skywalker on Tatooine and to Obi-wan Kenobi. It was a call for aid that would trigger a series of events that would change countless lives and ultimately the destiny of an entire Galaxy. One call for help would ultimately prove an ancient prophecy true and bring balance to the Force.

A common perception is that we must tough life out by ourselves. This is a common view among men. The “suck it up Princess” mentality is something I see every day in my line of work. In the Army we were expected to rely on each other as a team to get the job done. There was no shame in asking for help from the man beside you when you could not help yourself. We had each other’s back.

There were caveats. If a guy in the Platoon was having personal issues or going through an emotional crisis it was different. Showing weaker emotions was not accepted and everyone was expected to sort themselves out. If a guy had had a bust up with a girlfriend for example we took him out and got him drunk. That was the protocol for a broken heart or other emotional issues. Booze was the ultimate remedy. If a person could not carry their emotional baggage on the job, they were a liability.

Emotions not expressed as aggression, pride, competitiveness and other Alpha Male qualities were not welcome in our midst. It was the overpowering and addictive pull of masculine toxicity which defined us.

“Don’t be ashamed to need help. Like a soldier storming a wall, you have a mission to accomplish. And if you’ve been wounded and you need a comrade to pull you up? So what?” – Marcus Aurelius

The fact that so many wounded warriors are now struggling with PTSD and depression is no surprise. Around 22 veterans in the United States commit suicide every day. Even invincible heroes have scars that lie hidden and run deep. “Suck it up Princess” no longer cuts it and it probably never did.

Suicide is one of those topics we don’t like to talk about. Even today it is still a taboo subject among many. Most of us know of someone who has lost a battle with depression and taken their own life. It goes without saying that we are only human. People are vulnerable and fragile even beneath the physical and mental armor.

Accepting things as they are. Surrendering to a Higher Power. Recognizing the harms done to self and others. Taking steps daily to improve one’s self. Helping others. Who has time for self-pity with all of that? With recovery, thoughts of suicide dissipated along with the depression and anxiety.

“Sometimes, accepting help is harder than offering it.” – The Clone Wars “Legacy of Terror”

Recently on “Temple of the Jedi Order” I saw a thread about suicide. A number of people related how people known to them had committed suicide. They had “felt” something was wrong and now regretted not saying anything or doing anything. In many cases they had simply failed to recognize the signs and warnings. Most people aren’t trained to identify warning signs. Many times they may be subtle or absent.

Many people also don’t like to ask for help. They want to work it out alone. Speaking to others is a last resort. There could be a large number of reasons for this social, cultural or personal. Once help is sought it can turn everything around. Being alcoholic I shunned any offer of assistance and resented it. If I needed help then I had a problem. If there was a problem, change was needed. The problem was admitting to a problem in the first place. So we stay in a hole until life becomes so uncomfortable we are forced to seek help. Finding it we start to see the doors in our mind open and we begin to help ourselves.

Compassion and empathy are Jedi virtues. Jedi are expected to be willing to render aid and provide support where they can  and where it is needed. We listen with an open heart and without judgement. We can give our undivided attention without imposing conditions. It may not seem much but it might be all that’s needed to make all the difference.

Being Jedi is not forcing help on others. We help those willing to listen. In the 12 Steps we only “carry the message”. We listen and offer what assistance we can. Whether or not it is accepted or if our aid helps is out of our control. Be mindful that an offer of help does not mean “I will carry your burdens for you”.

Never forget that It is not unusual for us to neglect our own needs in meeting the needs of others. Be prepared to ask for help as well. By speaking to someone, a family member, a friend, a counselor or a sponsor it could make all the difference.

Remember. In Star Wars it was a lonely plea for help from a stranger that pushed Luke Skywalker in to action and ultimately into a journey of self-discovery, redemption and triumph.

“I know God will not give me anything I can’t handle. I just wish that God didn’t trust me so much.” – Mother Teresa

The book “Pay it Forward” by Catherine Ryan Hyde and the movie adaptation inspired many people when they came out in 1999. The story tells of a twelve year old boy who’s simple and brave actions in helping a stranger starts a movement that changes the world. It starts with an idea and then a simple gesture of kindness to a fellow human being. By “paying it forward” the flow of energy expands outwards, snow balling in to something that captures the world’s imagination.

“Pay if Forward” is a work of fiction as much as “Star Wars: A New Hope” is. The message is that every person has the power to help another. We are all on this rock together and have more in common than we know. Help, selfless altruism is a universal virtue. The power of help is universal.

Listening to others share their troubled and sharing our own is the basis of group therapy as used in the fellowship of AA.  Likewise being Jedi is being receptive to others and providing support where we are able. We know what goes around comes around. “Paying it Forward” is more than a catch term, it is the ballast that keeps society afloat. It also keeps many Alcoholics from sinking back into abuse.

Helping others without expecting anything in return keeps the energy flowing. Being of service, small acts of kindness replaces anger and fear with empathy and a sense of purpose. Those acts then take a life of their own. When help is offered to those that need it we are making a positive change, if only for a short time. By helping others we help ourselves. We pay it forward but we get to keep it too.

Self Help Exercise: Storming the Wall

We are conscious of our own thoughts and emotions. Some of us have trouble responding to extremes of emotions or unruly and chaotic thoughts. Emotions are meant to tell us how our internal world is coping with life. The mind is meant to help us to make choices congruent with our values. The trick is not acting on impulse or allowing emotions to rule our judgement and decisions.

I sometimes take a moment to shine a light on my thoughts and feelings. It’s a method I learned from Eckhart Tolle’s “Power of Now”. Especially when troubled I will pause and ask myself “what am I thinking?” and “what am I feeling? I become an impartial observer to my own thoughts and feelings. A light is thrown on my inner world and any negative thoughts are reasoned with and let go. Negative emotions exposed by the light are transmuted and dispersed through a simple act of mindfulness. There is no struggle. I have helped myself over the wall. I am returned to the power of the moment.

We may be resilient but like the soldier storming the wall we could use the occasional hand to help us up.