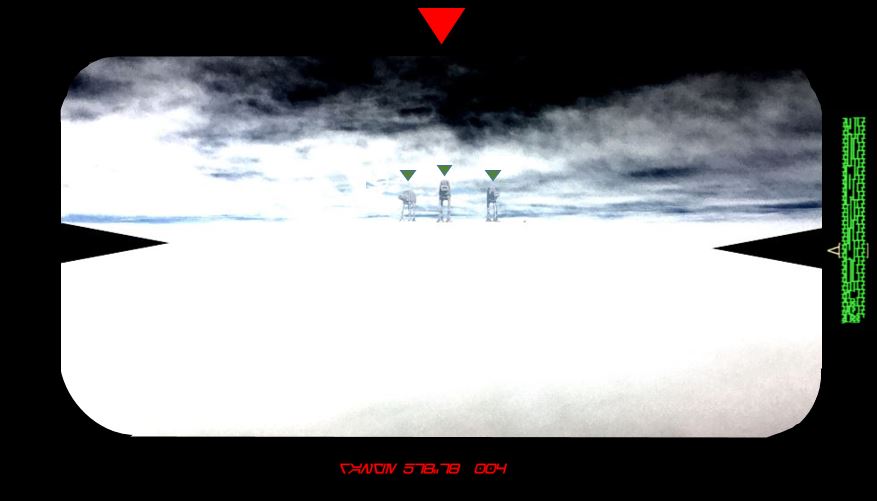 “The Force may not have a Light or Dark Side, but we do… and we must choose.” – Luke Skywalker

Over the last year of writing “The Daily Jedi” the concepts of acceptance, gratitude and surrender have been recurring themes.  In the Star Wars mythology we often see all three played out in the same scene.

Obi-wan Kenobi raising his lightsabre in a final move which had him cut down by Darth Vader was not an act of defiance or suicide but an enlightened gesture of acceptance, gratitude and surrender to the Force.

When Luke Skywalker appeared in “The Last Jedi” as a Force projection on the salt flat of Crait and challenged his former Padawan in a game of “Cat and Mouse” it was not a just a ruse to delay the First Order and give the Resistance a chance to escape it was an enlightened act using non-violence over brute force.  Luke Skywalker was emulating the philosophy of Obi-wan Kenobi and Yoda.  Luke accepted his fate without struggle and with gratitude and surrendered to the Force with complete trust. Meditating far away on Ahch-To, Luke was then able to transcend in to the Force and leave the physical realm behind. One can only imagine the implications of his transcendence in the coming final struggle. A great paradox was proven, there is great power in acceptance, gratitude and surrender and that power is called Abundance.

Luke said “The Force is neither Light or Dark”. The Force simply is. The Dark and Light that exists resides within us. We have a choice. You can also call it a choice between scarcity or abundance.

Look around you. What do you see? Are you surrounded by the trappings of modern living? Does your work and making money take priority in your life? Do you often stop to reflect that the days and months are flying past and the years growing shorter? Are you a “glass half full” or “glass half empty” type of person? Do you regret the lack or scarcity in your life or do you appreciate and enjoy what you have? One type of person has a “Scarcity Mentality”, the other person has an “Abundance Mindset”.

The “Scarcity Mentality” type is the person you meet who is always complaining. There is never enough or things are just not good enough. They bemoan the lack of opportunity in their life and recite one regret after the other. Blame is seldom placed on themselves but on others. The World and life seems to have played them a rough hand and let them down. They always have excuses to explain their misfortune. Rather than seek opportunity they wait for it to come beating down their door.

The “Scarcity Mentality” type is never happy, even in the midst of abundance. They may be financially well off, even wealthy and own all the material possessions most could only dream of. It’s never enough. They may have a nice house, several cars, a great career and a loving circle of friends and family around them but they see fault and lack. We see example of it all the time. The glossy tabloids are full of the “rich and famous” miserable in their existence. No amount of material possessions or money can fill the vast spiritual hole in their life. We shake our heads in disbelief and wonder how someone who is so rich, so famous and popular could be so unhappy. The person with a “Scarcity Mentality” has a “glass half empty” view on life.

“To live a pure unselfish life, one must count nothing as one’s own in the midst of abundance.” – Buddha

“Abundance Mindset” is the opposite to a “Scarcity Mentality”. The person who has claimed an “Abundance Mindset” is willing to accept the fortunes of life with gratitude but also accepts with equanimity that everything may be taken away in an instant.  As a result this person is perpetually grateful for what she has and will spend more time appreciating her blessings rather than focusing on the scarcity in her life. These people do not worry so much about what they don’t own.

The person with an “Abundance Mindset” accepts that all things are transient and by nature impermanent. We do not get to keep our possessions, our family and friends for ever. Our health will fade and eventually everyone will surrender to nature and the Force. This is the natural cycle of life and death. Rather than waste life regretting the things that were lost or opportunities missed or squandered focus is placed on being grateful for what was given and making the most out of what is on offer. Abundance Mentality people don’t mind sharing or giving credit to others and see opportunity everywhere.

“Not what we have But what we enjoy, constitutes our abundance.” – Epicuros

Peering in to the Glass

Alcoholism, like any addiction is a form of “grasping attachment” gone mad. All people grasp at things and seek attachment. It is the nature of suffering to do so. The human condition. Few learn to truly surrender themselves and let go of all of their attachments and in particular in life itself. Addicts are an extreme example because personal health, security and mental and spiritual well-being, relationships, career and money are all dispensable when it comes to getting the next drink, fix or hit. We Alcoholics did not care who we hurt or what we did to get drunk and keep drinking.

The “Scarcity Mentality” of the Alcoholic dictates that there is never enough. The old adage “one drink too many and a thousand not enough” comes to mind. Our dissatisfaction also extends to other areas of our lives. We see scarcity everywhere. Our jobs are not good enough, we don’t make enough money. All the people in our lives have glaring faults while we have none. People are not to be trusted and only used. There is fault in everything. Eventually we see the glaring truth in ourselves and rather than confront it we commit ourselves to the abyss.

Think “Sith” and you have a good example of the “Scarcity Mentality”. The “Sith” sought only power and were addicted to it. They craved it above all else. The complete domination of others was an exercise in power. Having the power of life and death over entire planetary systems was ultimate power. Absolute power is addictive. Ascendancy was the ultimate objective to the Sith. A Sith apprentice would serve his Master and then at the right opportunity would seek to usurp him. If the Master was wise he would kill his Apprentice before his Apprentice killed him.  The Sith played a cyclical Zero Sum game where only one could assume ultimate power at the expense of all others.

The fall of Anakin was the tale of a man with a “Scarcity Mentality”. The desire to excel as a Jedi and bring order to the Galaxy and balance to the Force dominated Anakin’s life. Anakin only wanted to do good but Inwardly Anakin was a mess. There was a gaping hole within him. The tragedy of his childhood and the death of his Mother affected him deeply. The Clone Wars also left deep scars, not all of them visible. Many of his friends had been killed in the fighting or betrayed by the Republic. The Jedi Order had evolved in to something that was no longer true to itself. Fear and anger began to consume Anakin. Obsessed by visions of the death of his forbidden love and wife Padme he sought ways to control the Force. Driven by hate he was finally driven to the Dark Side and became a Sith. The Fall led him to nowhere but a life of suffering and servitude to an unforgiving Master.

“You can see how mastery over a few things makes it possible to live an abundant and devout life – for, if you keep watch over these things, the gods won’t ask for more” – Marcus Aurelius

The Jedi Path is one where an “Abundance Mindset” is necessary to succeed as a Jedi. Obi-wan Kenobi, Yoda and finally Anakin and later Luke Skywalker learned to deal with life and tragedy with acceptance, gratitude and surrender. Through pain and suffering they found a way out and the door led them to enlightenment and unity with the Force. As Sages they learned that life is a gift to live and finally surrender with equanimity and complete acceptance.

“Luminous beings are we, not this crude matter.”  – Yoda

Being a real world Jedi does not mean we will achieve enlightenment in our life time. Some of us may have the potential but few will ever reach the spiritual, mental and physical level of a Jedi Master let alone a Sage. We can try however and having an “Abundance Mindset” of acceptance, gratitude and surrender is a start.

An “Abundance Mentality” is also a virtue and an asset in recovery. In fact it is necessary for our sustained sobriety as it throws a light on the fear, regret  and anger inherent in a “Scarcity Mentality”.  Our goal is to find no use for these destructive emotions. Psychology Today lists a number of ways we can cultivate an “Abundance Mindset”:

Remember that people with a “Scarcity Mentality” have a Zero-Sum view of life. They are like the Sith. In Star Wars we see Anakin and Luke Skywalker both grappled with attachments and emotions to their detriment. They wanted to control and possess. As an alcoholic I suffered the same way. An abundance mindset based on gratitude, acceptance and surrender means ridding yourself of the grasping attachment of a “Scarcity Mindset” and setting yourself free. Choose now. Will your glass (of a non-alcoholic beverage) be “half full” or “half empty”?

“Doing what you love is the cornerstone of having abundance in your life.” – Wayne Dyer

Abundance – The Daily Jedi – The Age of Taurus: last occurrence…