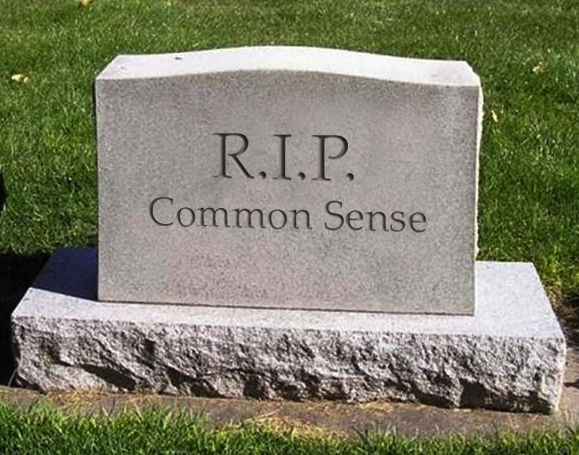 “Common sense” is a term used to describe the application of reasoning and good judgement in one’s life. The way is seen as the most obvious and most applicable in most circumstances. In other words the approach most people would choose in taking a course of action. Human nature would be the guiding principle.

At the practical level common sense denotes behaviour which supports well being. For example most people wouldn’t use a blow dryer while taking a bath. Any one with common sense would not hand their credit card details to someone on the phone claiming to work for the IRS. Common sense prevents us from making some obvious and stupid mistakes.

Unfortunately “common sense” seems to be less common in the world than one would expect. It seems to be the exception rather than the rule. We all make some whopping mistakes and foolish blunders that defy common sense and leave us and others wondering what went wrong.

I have spent years working in high risk and hazardous environments both in the military and in the primary industries like farming, logging and mining. Years ago everyone relied on a fair degree of common sense to stay safe. There were basic safety rules which were cardinal and reinforced. If a person was a hazard to himself or others he usually got moved on before he killed himself or someone else.

Common sense was the vernacular of the old timers it was a skill passed down and respected by the younger generation. Ultimately you either had it or you didn’t.

In recent times “common sense” has been pushed out with the old timers. Safety has bought in safe systems of work underpinned by procedures, supervisor training, lead and lag indicators and micromanagement. Common sense is viewed as dated concept that doesn’t work. People can’t be trusted to use their own judgement and think for themselves.

Employers don’t advertise for candidates who will show “common sense” in their duties. The word is one to avoid using on resumes and in interviews. Never say “common sense” to a safety professional; they will chastise you and declare that it does not exist.

Yet common sense does exist. Most people just abrogate their personal responsibility to others. Blame is an easier option than admitting mistakes. As a result common sense is less than common, it is rare. The most common sense failure is to make the same mistake over and over again. One would think that once or twice would be enough and three times unforgivable but sure enough…

“Common sense is not so common.” – Voltaire

Most Alcoholics have intuition and many are smart and intelligent. Common sense however seems to elude us. We can be creative and carry “street smarts” to get along but where alcohol is concerned we become experts in a twisted sort of common sense that only enable us to get drunk and stay in addiction.

Our attributes of dishonesty and selfishness enable us to find ways to get drunk in the most devious and creative ways. We hide bottles in unusual places. I have kept stashes of booze around the house and forgotten where I put them. I have hidden liquor in empty shampoo bottles. We have told the most plausible lies and staged the most elaborate ruses to get drunk even when we were isolated from alcohol or barred from drinking.

Prisons are porous; drugs, tobacco and alcohol still flow in. I managed to spend a bit of time in the Brig for AWOL among other offenses mostly related to alcohol. The regimental lock up was fairly tight sealed and its inmates closely monitored. We were kept busy around the clock till lock up.

Alcohol and tobacco were strictly forbidden yet I still had more than enough to keep me going while in jail. It took some covert operations type planning and execution and a bit of outside help. The MP’s tried to force me to reveal my method but I refused. Part of the fun was being able to buck the system regardless of the endless hours of digging holes, painting rocks white, parade, pack running and body blows I got for insubordination. If only I had applied myself in life with the same commitment and effort.

“The three great essentials to achieve anything worth while are: Hard work, Stick-to-itiveness, and Common sense.” Thomas Edison

My skills also kept me out of trouble at home and work years later. I knew how to evade police patrols doing random alcohol checks. There were contingencies in place to ensure I always dodged alcohol screening in the workplace when I knew my breath would knock over anyone who came within five feet of me.

Common sense suggested that any number of means to control drinking would work. Drinking reduced alcohol beer, starting later, counting drinks, pacing, time limits, eating a big meal and snacks, taking vitamins, drinking only organic wine, never mixing drinks, fasting, planning, exercise, meditation, swearing off and taking a vow to name a few. None of them worked. In the end working the Steps and practicing principles worked. It works because it is a common sense approach as much as a spiritual one.

“Most people die of a sort of creeping common sense, and discover when it is too late that the only things one never regrets are one’s mistakes.” – Oscar Wilde

The Roman Stoic and Emperor, Marcus Aurelius called common sense “Koinonoēmosunē” using the Greek origin of the roman concept of “Sensus communis“. Marcus was a pragmatic and grounded man but also very spiritual. In my view he was the world’s first Jedi. Despite his status as Emperor he did not consider himself above his fellow man. He saw himself as being of flesh and blood and subject to the same limitations and nature as all human beings.

The Stoics believed that all people share a common perception, not only as animals that need to eat, water, shelter, protect their resources and breed but also as a rational human being that act for the good of the community as well as one’s own self. Behaviors that were not ethical in the sense that they did not serve that purpose of personal and common good were seen as contrary to the idea of Koinonoēmosunē. Acting contrary to one’s own mental, physical, emotional and spiritual well being or that of others is contrary to common sense.

Koinonoēmosunē is exactly what we do when we participate in active recovery and self improvement. We improve ourselves and we aim to help others. Common sense is lived rather than applied on rare occasions. We do not abrogate reason and logic to others, we think for ourselves and weigh up our actions and assess them against our personal values. Responsibility for our conduct is accepted as an unalienable part of who we are.

The goal of world betterment through self betterment is the intent in Jedi action. Therefore to apply common sense in our lives is very much a Jedi act as well.

If we are having trouble deciding what common sense is remember that the fundamental rule is to “Keep it Simple Stupid”. That does not mean that we are stupid but we tend to over complicate our lives and act in ways that do not serve our interests in the long run. By breaking it down and applying the three basic questions of the “Jedi method” we are on our way to applying common sense in our approach:

You ultimately have to decide what common sense is. Just remember that it is not dead.