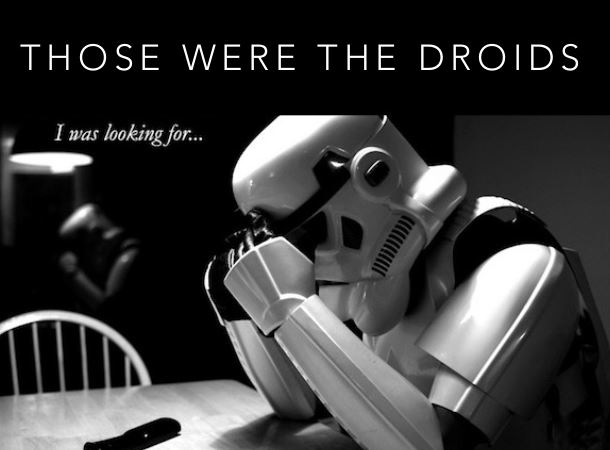 The Jedi Mind Trick was used by the Jedi in Star Wars to influence and alter a person’s belief or perception of a certain thing. In “A New Hope” Obi-Wan Kenobi uses the Jedi Mind trick to get past a Storm Trooper check point with the Droids being hunted by the Empire as they contain the stolen plans to the Death Star. Using suggestion, Obi-Wan is able to persuade the Clones that the two Droids are not the one’s they are looking for.

Jedi Mind tricks are used on several occasions by the Jedi as an alternative to direct action. The Mind Trick had its limits. It was useless against life forms with a strong sense of self will and mind. The winged Toydarians for example, were immune to it, probably because they were so good at selling spare parts to Bounty Hunters. The closest thing to the Jedi Mind trick in the real world is persuasion and suggestion. I can think of many times I was convinced to purchase something that I didn’t really need probably due more to my own gullibility rather than the Force.

“I am not the Drunk you are looking for”

Over the years I tried to apply a version of the Jedi Mind trick on others and found my powers lacking. People usually don’t want to do something unless they see personal benefit.  People are generally persuaded to something through reason, fear or the offer of reward. Once the motivating factor is removed, they stop doing it.

Jedi Mind tricks do not work in reality, I can’t wave my hand in front of a Police Officer and say “You have only had one beer, there is no need for a sobriety test”. I can try but I’ll probably get laughed at and then arrested. In some states they probably throw the book at people attempting to “Jedi mind-trick” law enforcement Officers.

So if I can’t “Jedi Mind Trick” my boss to give me a pay rise or a day off, my teenage daughter to tidy her room or my wife to cook my favorite dish can I use it on myself? That is, can I use a form of Jedi Mind Trick to help me achieve a sense of equanimity and balance? How can I mind trick myself to happiness?

There are two ways to trick your mind in to a better state. One is based on a false perception of reality and only works for a short time because deep down you know it’s not real. We call that “wishful thinking” or in my case it was “wishful drinking”. That is, getting drunk to feel better and capture a fleeting sense of happiness, fulfillment and contentedness. The other way takes effort and requires mental training. Acceptance and Commitment Therapy (ACT) is one such method based on Mindfulness and Cognitive Behavioral Therapy.

“Wishful Drinking” of course is also a book by Carrie Fisher where she recalls the story of her struggle with alcohol, drug abuse and depression. It is a humorous and at times sad portrayal of a woman we came to know and love as Princess Leia. The relevance of course is that Acceptance and Commitment Therapy is all about achieving equanimity and balance, not a shallow illusion of happiness. Happiness is your own personal view point and what makes you “happy” will change over time. I know it has for me. In the book, Carrie Fisher makes the following point about happiness which many of us can relate to.

“Happy is one of the many things I’m likely to be over the course of a day and certainly over the course of a lifetime. But I think if you have the expectation that you’re going to be happy throughout your life–more to the point, if you have a need to be comfortable all the time–well, among other things, you have the makings of a classic drug addict or alcoholic.”
― Carrie Fisher, “Wishful Drinking”.

We know of course that life is not a fairy tale and if we expect to be happy and fulfilled all the time we are setting ourselves up for disappointment. The concept of true “Happiness” seems elusive but it is not. I have seen the happiest and most contented people alive in some of the most modest of settings in the poorest countries in Africa, South America and Asia.

What made these “poor” people happy? Well, they know who they are, they feel connected with and valued by their community, they are surrounded by loved ones and they feel like they are making a contribution. They live simple and productive lives and realize what truly matters. Most of all they are committed to living in accordance with their principles and values.

Watch the Netflix documentary “Happy” if you don’t believe me.

People who are unhappy are unhappy about not being happy as they define it. This is called the “Happiness Trap” (Harris, 2008). Sound like a Jedi Mind Trick?

This is what Acceptance and Commitment Therapy (ACT) is about. It is a mind hack that adjusts our perception of ourselves and our response to life in a realistic and honest way. It gets us out of the “Happiness Trap”. There is no simple and temporary “Jedi Mind Trick” to it. The idea is not to “fool” our brain but to train it in “right thought” through pragmatism and mindfulness. With practice ACT rewires how we think about ourselves and the things that bother us and with practice it takes barely any effort to apply in our lives.

The method has been used to help treat veterans suffering anxiety and PTSD and as an alternative to drug therapy. ACT is also gaining popularity with Psychologists and Therapists as a simple and easy way to treat addiction, anxiety and depression. The US DVA promotes ACT as one modality and offers a free app called ACT Coach to use in conjunction with therapy and meditation.

The core principles of ACT are acceptance, commitment and action. The key primer is mindfulness. All of these are key Jedi traits:

The wonderful thing about ACT is that it is so easy to do with practice and can be incorporated in to a meditation practice. The very essence of ACT is in the 12 Steps program so if you are working the steps alone, with a home group or a sponsor there is a good chance you are doing it already and reaping the benefits in your recovery. If not, discuss it with your Therapist and explore it as an option, try it and if it works for you keep doing it.