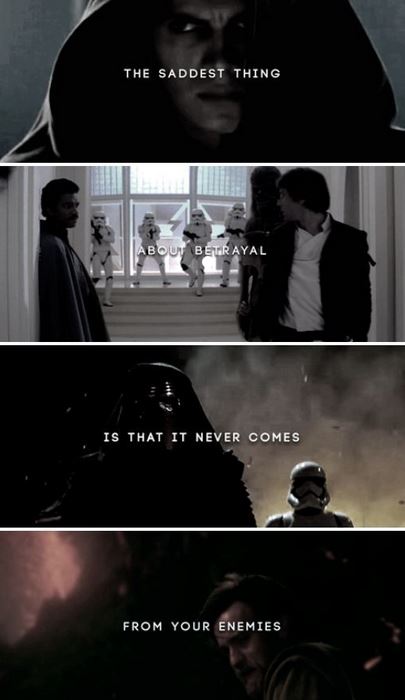 “Have they asked you to betray the Jedi code” – Palpatine

“I felt a great disturbance in the Force, as if millions of voices suddenly cried out in terror and were suddenly silenced. I fear something terrible has happened.” – Obi-Wan Kenobi

Have you ever been betrayed? How did it make you feel? Were you angered by the actions of the person you trusted? Did you berate yourself for giving them your trust and resolved never to do it again? Did you grieve the act and the loss of trust that came from it? Were friendships and illusions of trust shattered?

Betrayal is such a terrible thing. Betrayal feels like a stab to the heart but it does not always kill but it does burns the soul and hardens the heart.

In the last ten days I have come to realize that to suffer betrayal is to suffer the five stages of grief. There is denial, anger, bargaining, depression and finally acceptance. I have felt them all. The thing is, the betrayal did not happen to me. I was not betrayed. I don’t even know the people who were betrayed and have never been to the place where it happened. Their betrayal is the worst kind, because they are dying from it. It still feels as if it happened to me and to those close to me such is the insidiousness of the betrayal.

“They will betray you, just as they betrayed me.” – Palpatine to Anakin

We have all been betrayed at one time or another. Some of us have been betrayed by our parents, lovers, friends, partners, workplace, religious leaders as well as our government. I know I’ve been betrayed at least once by all of the above. To describe it all in detail would fill a book. It should have made me bitter and unable to trust anyone. For many years it did and my grief lasted that long. I coped from the pain and anger of it with alcohol.

Mythology teaches many lessons. The stories may be fantastic and far from reality but they hold a mirror up to the foibles, follies, failures, tragedies and triumphs of the human condition. Betrayal is an act which has a special place in our collective mythology.

The myths are brimming with betrayal. The Norse God Odin was a God of betrayal as was Loki. The Greek God Dolos inspired betrayal. The Slavs had Czernobog and the Hindus have Vibishana in their epic myths of betrayal. People often complain being betrayed by God. Yet betrayal is a very human trait.

Jason of the Argonaughts was married to Medea and betrayed her for another. In return she did the unspeakable and slew their children. The war between Sparta and Troy started when Helen betrayed her betrothed, Menelaus for Paris.

Prometheus defied the will of Zeus and during creation gave humans the ability to make fire and use free will. This betrayal enraged Zeus, who creating Pandora gifted her to Prometheus’s brother Epimetheus. Pandora carried with her a box that Zeus had filled with every evil and misfortune that she would inevitably release upon the Earth.

In Star Wars there are many acts of betrayal. The relationship between the Sith Master and apprentice led to eventual betrayal. Dooku betrayed Darth Maul and Asajj Ventress. Darth Sidious betrayed Darth Plagueis and killed him as he slept.

Lando Calrissian turned over his friend Han Solo to the Bounty Hunter Boba Fett. The Mandalorians were betrayed by their own Prime Minister who handed the seat of power to Darth Maul. Finally, Anakin betrayed the Jedi Order by turning to the Dark Side and setting a chain of events that would lead to the destruction of the Jedi, the exile of survivors, the fall of the Republic and the rise of the Sith.

Obi-Wan Kenobi betrayed Anakin on the lava flows of Mustafar leaving him for dead. Later he told Luke that Vader had betrayed and killed his father.

“Their betrayal will be dealt with. After you have killed all the Jedi in the Temple, go to the Mustafar system. Wipe out Viceroy Gunray and the other Separatist leaders. Once more, the Sith will rule the galaxy, and we shall have peace.” – Darth Sidious to Anakin

In our reality we see betrayal played out on the stage of life. Recently civilized nations, in particular America, chose to abandon and betray their true friends and staunchest allies in the Middle East, the Kurds. The ethnic and religious minorities of that place so far away are now at the mercy of a merciless invader, Turkey and its Jihadi proxies.

The reasons are purely geopolitical. The American, British and French soldiers that fought alongside their Kurdish counterparts are still devastated by the betrayal. They were there to safeguard the people from genocide. They grieve as I grieve. No one should be left behind like that especially the Kurds who sacrificed and suffered so much in the fight against ISIS. I learned this as a soldier and believe it as a Jedi.

“You’re with him. You’ve betrayed me! You brought him here to kill me!” – Anakin to Padme

We can now watch the tragedy of betrayal play out in real time as if we were watching the fall of Mandalor or the purge of the Jedi by Darth Sidious and the brutal ascendancy of the Empire. Genocide and ethnic cleansing. The blood on the streets, the destruction, death and fleeing masses are real. They are the victims of betrayal. How can one not grieve? How can they ever forgive? Why did it happen?

Still the people we let down, do forgive us.

The Bible tells us that Jesus was betrayed for 12 pieces of silver by Judas. I wonder what went through the mind of Judas. How did Jesus feel? The Bible says that Jesus kissed Judas and forgave him. This drove Judas to insanity of regret and despair at his actions, so much so that he hanged himself from a tree. Joseph, the son of Jacob was sold into slavery by his jealous brothers. Taken to Egypt he became a friend and advisor to the Pharaoh and rose to the the rank of Vizier. Later he reunited with his brothers and forgiving them sent for his people in Canaan to live in Egypt till a famine had passed.

Forgiveness opens the door which leads to freedom from the pain of betrayal. We must be willing to let go of the past if we expect others to accept our amends. It is the path to peace and serenity. To do otherwise is to keep a deep resentment alive with us. We can never be free if we do. You can really only betray yourself.

“I will not betray the Republic” – Anakin

There is a Kurdish saying “Berxwedan Jiyane” which means “Struggle is Life”. After centuries of suffering they know that the price of freedom is to struggle. I hope our friends and allies in North-East Syria forgive us for what we have done. They have been betrayed and proven once again that they have “no friends but the mountains”.

It is not the first time they have been betrayed. Each time they forgive and put renewed trust in those who cannot be trusted. My heart goes out to them. There is nothing more I can do but pray and hope for a miracle.

In betrayal there are no winners, only tears and regret. Can you betray the Jedi Code? Betray none least of all yourself.