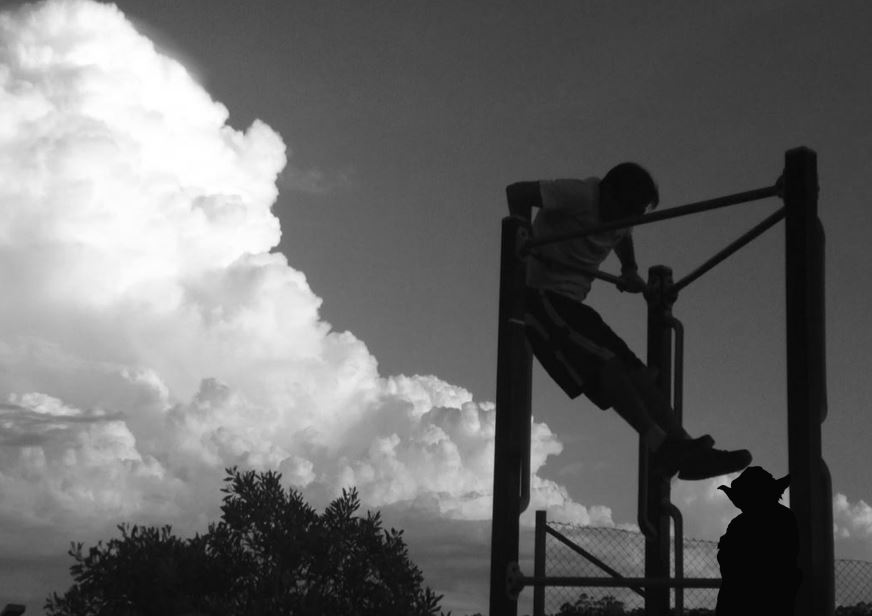 “I’ve got a bad feeling about this” – Han Solo

Voluntary Hardship is one thing but loving adversity is at an entirely different level. It sounds devious and twisted but it works and it is incredibly effective in building Resilience.

“Embrace the Suck” is a term used in the Military. I’ve heard it used in one form or another in three different Armies in three languages. The term was also adopted in CrossFit and you hear it in the Box around the World.

Embrace the Suck means diving in to the crap and wallowing in it with a grin on your face. You know you are going to hate it and you know it will suck badly but you flick a switch in your head that reads “Beast Mode” and you wade in. It is a process of turning a negative perception of an experience upside down by surrendering to it.

“When a man is beaten, tormented and defeated…He is ready to learn something.” – Emerson

The Navy SEAL former Commander Mark Divine calls Embracing the Suck the essence of the Warrior’s “Unbeatable Spirit” or “Kokoro Mind”. It is the essential ingredient for success and one that alludes 80% of candidates attempting the world renowned and feared BUDs course.

Those that pass selection the SASR or the Navy SEAL BUDs Operator training will tell you that the course was 80% mental and 20% physical. Those that somehow get through it all will admit that the key to success  was to drop all resistance to the experience and truly embrace it with every fiber of your being. This means total commitment and focus. The evolution is entirely mental, emotional and spiritual. The pain and discomfort is an illusion that is temporary and transitory. By “Embracing the Suck” the candidate for Special Operation Forces transcends to another level.

“The greater the obstacle, the more glory in overcoming it.” —Confucius

I can’t stand heights. Once during a course in the Army I had to traverse across a 50 meter canyon. A cable was suspended across a chasm that was at least 100 meters deep.

I attached my carabiner to the cable and swung on so that my body was lying on it with one leg dangling for balance. Pulling myself across the cable I kept my eyes on the Instructor on the opposite side of the canyon. Pulling myself closer and closer using my hands and mounted leg pumping to slide my body forward. I refused to look down. Suddenly I felt myself swaying to and fro. It became worse and worse and I realized the Instructor 30 meters in front of me was pulling the cable violently. I froze.

“Let go of the cable” the Instructor bellowed, “get the F__ off!” he yelled again.

I shook my head with a stifled no and the Sergeant swore and started to pull at the cable harder. “Let the F___ Go!” he yelled again. A Corporal standing near by laughing went over and also started to pull. The cable lurched back and forth and I felt like I was going to be flung off. I let go.

I was suspended above the void looking straight ahead as I swung with the cable above me. An old blue lanyard and a rusty carabiner was the only thing keeping me from falling to my death. My mind was racing in panic and I wondered if the lanyard and carabiner were going to hold. I heard my number being called.

“Student 67! look at me”, the Instructor yelled out. I stared at him. “Embrace the Suck and grow some balls Student 67! Now look down!”. I looked down and could see trees far below and a dry wadi bed. My stomach rose to my mouth. I heard my number again.

“Stand at attention and give us a smile”. I thrust my arms down and bought my feet together and gave a grin. There was laughter. “What are you waiting for dickhead?” the Sergeant yelled “remount and get over here”. I was back on the cable in a second and apparently broke the record for the fastest time across. 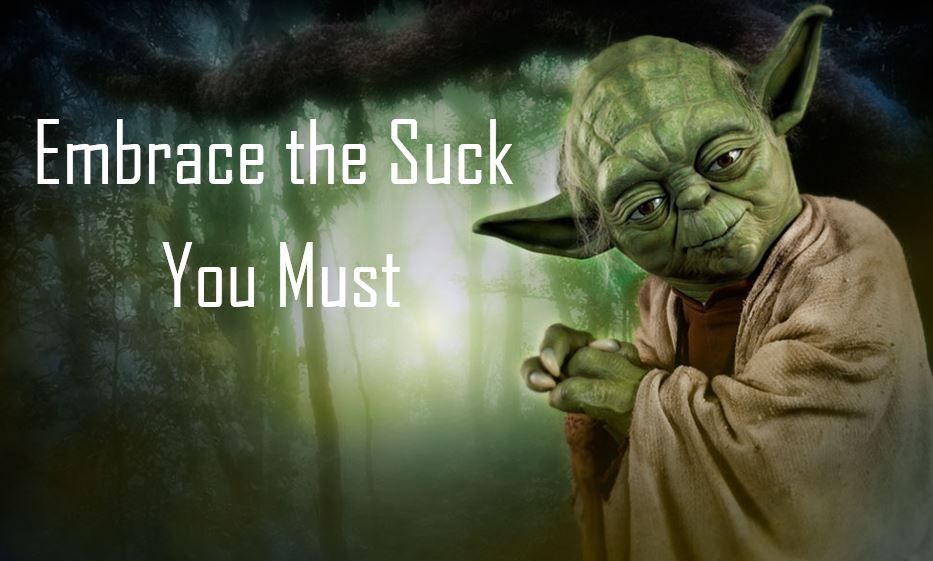 For us mere mortals the lesson is clear. In order to build resiliency and then strengthen it we must relish any opportunity to put ourselves to the test. Rather than avoiding the unpleasant we must seek it out. This means turning up to training even when you don’t want to. Running the extra mile when you think you are going to puke. Putting your hand up for the most unsavory and unpopular jobs. Taking out the garbage or scrubbing the latrines. It might be filling in for someone’s shift when they can’t come in when you’d rather have the night off. This mean but not just doing it but doing it with enthusiasm and a sense of gratitude that people will start to wonder if you are not quite sane.

“Embracing the Suck” means “The Obstacle is the Way”. Any challenge faced is an opportunity to demonstrate virtues and practice principle. Someone hurls abuse at you in traffic? Give them a smile. You are having a real bad day and falling behind and someone comes to you asking for help on something trivial? Be patient and offer to help later. You have made an expensive blunder at work and fear getting reprimanded or losing your job? Owe up to the mistake, take responsibility and face the music. Making amends but too reluctant to face someone? Just do it anyway. Never compromising on your principles naturally builds resilience.

You have 100 Burpees to do and you want to quit at 40 and puke? I had a Platoon Sergeant in the Army that used to say that “Pain is weakness leaving the body”. Embrace the Suck and keep going.

“Whenever you suffer pain, keep in mind that it’s nothing to be ashamed of and that it can’t degrade your guiding intelligence, nor keep it from acting rationally and for the common good.” – Marcus Aurelius

By embracing the adversity and unpleasantness of life as well as the good we are practicing the very concept of surrender. Buddhism teaches that what we resist persists. When we deny what is happening or throw up resistance to it we create suffering.

Every painful event, disappointment, lost opportunity, misfortune and missed chance can be a gift in disguise. We are given the opportunity to practice virtues and improve ourselves.

There is a choice in practicing Voluntary Hardship but in life we encounter hardships and responsibilities every day that “Suck”. A relationship may be on the rocks, work may be driving you crazy, you can’t get out of an emotional rut. Pause and reflect on what you can do to change the situation and get to work.

This means applying your principles and being true to your values even when your ego is telling you to do the opposite. Someone offended you? Suck it up and grin at them. Your look will tell them that you are no snowflake. Embracing the suck is also letting go of your fears. With the internal resistance gone we can flow through and with the experience. Over time things that used to seem daunting will no longer bother us. They will resolve themselves if we stop fighting them.

“It takes discipline to focus only on high-value targets instead of giving in to the temptation of the low-hanging fruit life serves up daily.”  – Mark Divine

One of the reasons I failed in my attempts at staying sober for so many years was because I chose comfort over courage. I did not want to suffer and ironically I suffered more by not doing anything to change. My attempts involved trying to force change on others and fighting everything and everyone. I missed the fact that trying to control what is not of my own doing would only frustrate me more. Embracing the Suck meant taking full ownership and responsibility for my Life.

Admitting to a problem or fault takes honesty and humility, deciding to turn over your life to a Higher Power takes Faith, living your principles everyday takes Courage. None of it is easy of comfortable. You are choosing “Courage over Comfort” by taking the plunge. By “Embracing the Suck” you are fully committed and focused and using the experience as a chance to grow.

Imagine taking that attitude in to your daily life. How much easier things would seem. “People who wade in to discomfort and vulnerability” are the real badasses. Those that “Embrace the Suck” create an Unbeatable Spirit that cannot be beaten down. 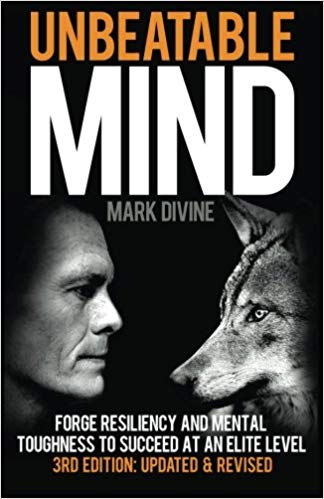